"I am completely smitten with the Lunch with Books patrons...who welcomed me like a long-lost cousin. It takes two to have a successful reading: an enthusiastic presenter and an engaged audience, and boy did the stars align for us." -Marie Manilla, Still Life with Plums

"Lunch With Books is an outstanding program -- one of the best in the country." -NPR Journalist Matthew Algeo, The President is a Sick Man


"With a new book in hand, I’ve visited a lot of libraries lately, and I think the Ohio County Public Library is my all-time favorite. People are kind and welcoming, and deeply appreciate a visiting writer." -Jaimy Gordon, Lord of Misrule (National Book Award)

This blog is being discontinued.

JUST ANNOUNCED: The following program will be hosted by Bill DiFabio and broadcast live on his WKKX radio program (1600 AM). Listen to Bill's show at 1 PM Thursday June 10 for more details.

Art Rooney, Jr., the second son of Arthur J. Rooney, Sr. “The Chief,” legendary founder of the Pittsburgh Steelers, will appear at Lunch With Books at the Ohio County Public Library on Tuesday, June 15 at noon. Mr. Rooney, who served as the team’s scouting director during the formation of the great Super Bowl teams of the 1970s, will discuss "Ruanaidh," the book he wrote with sportswriter Roy McHugh. Part memoir, part anecdotal history of Pittsburgh's North Side, and part football book, Ruanaidh (Irish Gaelic for Rooney) details the extraordinary story of the Chief, his clan, and his team. The program will feature a conversation between Mr. Rooney and Pittsburgh sportswriter Jim O’Brien, who has also written several books on the Steelers and Pittsburgh sports. Bill DiFabio of WKKX AM 1600 will host, and the conversation will be broadcast live on Bill's show. Copies of Ruanaidh and Mr. O’Brien’s books will be available for purchase in time for Father’s Day gift giving. Lunch With Books programs are free and open to the public. Patrons are invited to bring a bag lunch and free beverages are provided. NOTE: RESERVATIONS ARE REQUIRED FOR THIS PROGRAM. Please call the library at 304-232-0244 for more information. 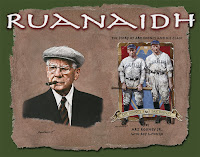 The Ohio County Public Library facilitates book discussion groups for both young adults and adults. Currently, the OCPL offers two adult groups, which meet on the first Monday and third Thursday of each month.

In addition to its own growing collection, the OCPL has access to the book discussion collection of the West Virginia Library Commission.

Meeting of the Minds Philosophy Group

The Meeting of the Minds Philosophic Inquiry Forum is facilitated by David Weimer. The group meets virtually every Tuesday at 6 PM. Call the library for meeting room locations.

For more information, visit www.firstknowthyself.org/m&mphilosophy.htm or contact group organizer, David Weimer, at 740 526-0985 or by email at dwwweimer@comcast.net..

Get Lunch With Books Merchandise!

“Speaking [at Lunch With Books] was the highlight of my summer. A spectacular facility, a wonderful array of speakers, and a community dedicated to one of its finest resources. You all should be proud of what you're doing. I look forward to returning.” -Rudy Dicks, The ’63 Steelers

"I am completely smitten with the Lunch with Books patrons and their fearless leader, Sean Duffy, who welcomed me like a long-lost cousin. It takes two to have a successful reading: an enthusiastic presenter and an engaged audience, and boy did the stars align for us. It’s not always easy to read one’s fiction in public, but this library family provided a sea of welcoming faces filled with warmth, attentiveness, and good will. Their generous laughter and emotional investment helped me to bring my prose fully to life. A thousand blessings to you all." -West Virginia Author Marie Manilla, Still Life with Plums

“We set a personal attendance record and personal best for the number of books sold!”

"I enjoyed my talk at your library very much indeed. There was a very special rapport between the audience and me. The informality and good humor with which you conducted the proceedings also helped make my visit most enjoyable. I can see why so many people attend your programs." -Judge Thomas Buergenthal, A Lucky Child

"A Few Words about the Ohio County Public Library:

With a new book in hand, I’ve visited a lot of libraries lately, and I think the Ohio County Public Library is my all-time favorite.

This is a handsome library in the historic riverfront city of Wheeling, with a dedicated and articulate Coordinator of Programs, Sean Duffy, who brings in a large and spirited audience. There’s a real sense of community here, almost of family. People are kind and welcoming, and deeply appreciate a visiting writer, especially one who shows an interest in their city. I had a wonderful time there." -Jaimy Gordon, National Book Award Winning Author of Lord of Misrule

"If I want the best and most attentive and responsive audience I know I will have it during Lunch With Books...at the Ohio County Library. No one is looking for a free lunch. They're looking to learn more about the latest books and they buy their share of them. I wish I could find more venues as good as this one.." - Author Jim O'Brien, The Chief and Steeler Stuff

"It was a great event, a real highlight of my trip. I look forward to returning when my next book comes out! You guys run some really great programs. Keep up the good work.” -Author Matthew Algeo, Harry Truman’s Excellent Adventure

"It was (another) smashing success. Lunch With Books is an outstanding program -- one of the best in the country. Hopefully, I will get another chance to get back to Wheeling." -Author Matthew Algeo, The President is a Sick Man

"I'm truly impressed with 'Lunch with Books.' You have built up a great program. Keep up the fine work... If the distance wasn't so great I'd love to be a lunchtime regular myself."

"Our visit with you was one of the highlights and most memorable of our book tour. We had as much fun as the patrons...It was an honor for us to join you…” -Janice & Sylvester Myers, author of From Coal Fields to Oil Fields and Beyond

"I am very impressed by Lunch With Books. This is the best series of its kind that I've seen in all my travels in OH-WV-PA.” -Author Jim Joyce, The Bicycle Book: Wit, Wisdom, & Wanderings

"The audience was very responsive and made the event fun for me. You have made the Lunch With Books program a great success. It is the best adult library program that I have seen in the state. You should be proud of your achievement...Thank you for giving me a great forum to discuss my book." -Bob Barnett, Growing Up in the Last Small Town: A West Virginia Memoir